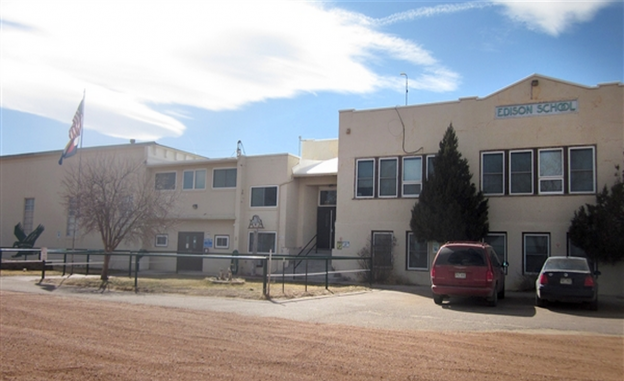 At Colorado's Edison School, teachers and administrators strive to bring technology to every part of the curriculum to ensure that rural students are ready for college and beyond. Photo by Sarah Butrymowicz, as seen in the original "post":http://blogs.kqed.org/mindshift/2012/06/bridging-the-digital-divide-in-rural-schools/ on KQED's MindShift.

Surrounded by farmland and ranches, Colorado’s Edison School sits off an unpaved road, with tumbleweeds blowing across its dirt parking lot. As recently as a few years ago, many families relied on solar or wind power instead of electricity; today, many still haul home their water from wells. Principal Rachel Paul estimates that 25-30 percent of her students don’t have Internet access at home.

Yet at Edison — where about three-quarters of the 120 K-12 students are eligible for free or reduced-priced lunch — there are as many computers as there are students. On one recent day, Paul Frank’s fourth- and fifth-graders started off by learning about latitude and longitude on Google Maps and ended sprawled around the classroom on laptops, putting together presentations about the Midwest. While one student searched for photos of famous people born in Minnesota and Wisconsin, another used Google to find out Nebraska’s annual rainfall.

Rural America lags behind the rest of the country in Internet usage, making rural schools an important center of connectivity in the communities."

Frank and administrators in the two-school district, located an hour east of Colorado Springs in Yoder, Colo., have big technological ambitions. They want to infuse technology into every bit of the curriculum, from using iPods to help elementary students practice reading to mandating that high-school seniors take a computer-science course to graduate.

It’s not about improving test scores — last year, every single one of Edison’s elementary students was deemed proficient on the state’s math exam. Instead, the goal is to expand the students’ horizons and prepare them for college and the workplace, where technological literacy will be assumed.

“Kids don’t have access to that kind of stuff at home,” Frank said. “It’s the future. They need to know how to do this.”

Rural schools have long been leaders in distance-learning and online education — to offer a full slate of courses to their students, they’ve had to be. In fact, Edison has a fully online school that enrolls about 100 other students in the district. But when it comes to technology inside traditional classrooms, the small sizes — and budgets — of rural schools present unique hurdles.

Some states, fearing a divide between rural and urban communities, have developed statewide initiatives to provide technology to rural schools. Maine, for instance, gives every student a laptop, and Alabama requires all school districts to offer Advanced Placement courses through distance-learning technology, where students video-conference with teachers.

But in many places, the onus is on the already-strained staff of the schools to acquire and then use things like computers and iPads, leading to pockets of innovation, like that in Edison. Although it leaves a line in its budget for technology upkeep, Edison has supplemented its tech experimentation with a $10,000 grant from the Denver-based Morgridge Family Foundation.

In districts facing shrinking budgets and consolidation, technology could be rural schools’ saving grace, said Bob Wise, a former governor of West Virginia who now serves as president of the Alliance for Excellent Education, a national advocacy organization in Washington, D.C., that has studied the challenges facing rural schools. “We’re encouraging every district to develop a systematic strategy for employing technology,” he said. “My guess is you will see a number of rural schools actually saved and renewed as learning centers.”

Rural America lags behind the rest of the country in Internet usage, making rural schools an important center of connectivity in the communities. In 2010, for instance, 57 percent of rural households had broadband Internet access, compared with 72 percent in urban areas, according to a November 2011 report by the U.S. Department of Commerce.

In Yoder, Frank tries an experiment with his students every few months. He gives them a homework assignment that must be submitted by email. When he started doing this a few years ago, he’d be lucky to get five responses. Most recently, all but three of his 21 students emailed him something. In part, he said, the improvement is a result of work the phone company has done in the area, making it easier for homes to get broadband Internet access.

Still, teachers can’t count on students being able to go online to complete assignments and have to be flexible about staying after school so students can work on the computers. “Getting the Internet into the homes is going to become our No. 1 issue,” said Deirdre Binkley-Jones, Edison’s high-school math and computer-science teacher. “We’re still dependent on traditional methods.”

While technology doesn’t necessarily lead to better student performance, it can expand students’ horizons beyond just preparing them for college or the workforce.

“The Internet can give them library resources that they might otherwise not have,” said Aimee Howley, senior associate dean in the College of Education at Ohio University who studies technology integration in rural schools. Technology can also be used for simulations of things “you just can’t do on site. You can’t create a chemistry lab, dissect a whole bunch of animals.”

Edison has used distance-learning equipment to take elementary students on a field trip to NASA and to teach them about the Civil War. Frank’s classroom frequently practices writing and communication skills by “blogging” on class discussion boards about stories they’ve read. High-school students might use Rosetta Stone to learn Spanish or watch free videos from the Khan Academy to master math concepts. Before receiving their diplomas, all students learn the basic coding behind computer games.

Howley has found that rural teachers are open to using technology in their classrooms, but she cautioned that doing so in rural schools typically requires innovative faculty to take on extra responsibilities. Even then, schools often don’t have the money to buy computers or tablets and offer teachers corresponding training.

Teachers not only need to know how to use new gadgets, but also must be prepared to use the tools in ways that improve student learning, Howley said. Although Edison’s grant money has paid for some teacher training, it’s not enough to cover everything.

Frank, the self-proclaimed technology “guinea pig,” has learned by doing. When he first got an interactive Smartboard, for instance, he and his students learned together how do to things like upload textbooks and record attendance. Now, he’s got the other elementary teachers using Smartboards and even iPod Touches to monitor reading fluency, but the laptops rarely leave his classroom.

“I use [the Smartboard] for a year and figure out all the bugs,” Frank said. “It’s been really exciting to see the other elementary teachers buying in to using the technology.”

But enthusiastic as he is about the potential of digital learning, Frank isn’t an IT expert — and it’s rare for rural schools to have one. “You get this much technology and you need a lot of tech support, and we don’t have it,” said Paul, the principal. “Then we’re just frustrated.”

Edison joins with other schools in the area to share an IT person, who comes once a week and mainly tends to the school’s servers. Without extra help, though, Edison may have reached its limits. “At this point, getting more technology would be a disaster,” Binkley-Jones said.

Although many staff members say students are enthusiastic and take to technology easily, Binkley-Jones finds herself teaching basic computer skills — how to open or save Word documents, for example — to high-school students.

As the school moves forward with its five-year technology plan, which will include expanding distance-learning and more training for teachers, the elementary staff will need to address the challenge of technology adoption in primary education.

“Even five years ago, we would have been happy with kids graduating knowing how to write a Word doc,” she said. “The focus in technology is moving away from [just] being able to use a computer.”

Photo of laptop lab by St.Mary’s County Library on Flickr. Photo of school library by Utah State Library. Both are used with Creative Commons license.

Sarah Butrymowicz is a staff writer at the Hechinger Report, a nonprofit news organization focused on producing in-depth education journalism.

This story, Bridging the digital divide in America’s rural schools, was produced by The Hechinger Report, a nonprofit, nonpartisan education-news outlet based at Teachers College, Columbia University.