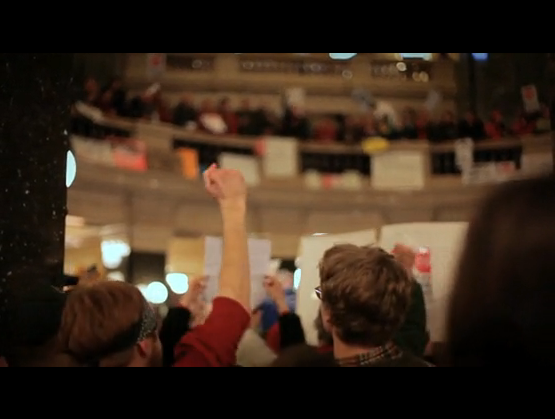 A still from the Kickstarter promo for Sam Mayfield's "Wisconsin Rising" documentary project, which raised more than $40,000 in less than 30 days.

Need $40,000 to produce a local documentary? Just ask your audience.

That’s what filmmaker Sam Mayfield did, for a film she’s working on about last year’s protests in Madison, Wis. In a blog post on January 13, she wrote:

Compare the return on investment of your current efforts with the potential return of something like Kickstarter, which excels at raising money for targeted, specific projects.
ADVERTISEMENT

We are currently trying to raise $40,000 of our $200,000 budget through Kickstarter, the online fundraising platform that facilitates grassroots investment. We set a target goal and must raise that amount or lose all pledged funds by the set deadline of 12 p.m., January 21. If we are successful, we’ll join over 15,000 artists, filmmakers, activists and entrepreneurs who have collectively raised over $125 million using this innovative crowdfunding model.

Sound too good to be true? Well, in some ways, it is — Kickstarter and other so-called crowdfunding sites like IndieGoGo aren’t a silver bullet, where you simply set up a web page asking for money, and the donations come rolling in. (If only it were so!) On the other hand, a lot of independent producers are finding tools like Kickstarter and IndieGoGo incredibly effective, prompting non-profit strategist and author Beth Kanter to recently ask, “Are Crowdfunding Platforms the new Patrons of Independent Media?“

Al Letson’s ‘State of the Re:Union’

These platforms have been kind to a number of producers throughout the public media community. For example, “The Sound of Young America’s” Jesse Thorn, “State of the Re:Union’s” Al Letson, and “Destination DIY’s” Julie Sabatier have all used Kickstarter to raise money for their projects, ranging from $5,000 for video documentaries (Letson) to over $70,000 for a web series (Thorn). When filmmakers Pamela Yates and Paco de Onis wanted to make their documentary, “Granito: How to Nail a Dictator,” eligible for an Oscar nomination — which meant securing theatrical runs in New York and L.A., and creating a 35-millimeter print of the film — they turned to Kickstarter for help, and exceeded their $30,000 fundraising goal; P.O.V. writes about the campaign here.

In other words, crowdfunding works. But not always, and not without a lot of work.

“This is going to take up a lot of time. You should plan to devote time every day, or every other day, to make the campaign a success,” filmmaker Theresa Loong wrote in her excellent “Kickstarter How-To” slideshow. (Thanks to Cathy Fischer at ITVS for pointing me to this resource.)

Then again, what effective fundraising campaign doesn’t require a lot of effort? Compare the return on investment of your current efforts with the potential return of something like Kickstarter, which excels at raising money for targeted, specific projects.

Letson notes that Kickstarter campaigns have a built-in sense of urgency, which helps drive support, because people know that if you don’t reach your fundraising goal, you don’t get to keep any of the donations you’ve received. That’s right — with Kickstarter, it’s all or nothing. That’s not the case with IndieGoGo, which lets you keep your contributions no matter what — but if you don’t reach your goal, the site takes a larger cut. Another option is GoFundMe, which Letson says has helped him raise money for theater projects — but again, he notes that the downside of the site is that it lacks Kickstarter’s sense of urgency, leaving supporters feeling like they may have all the time in the world to make a donation … meaning, you may be less likely to reach your goal in the desired time frame.

To be clear, you wouldn’t use Kickstarter or these other tools to raise money for your station in a general way (“support WXYZ”); rather, you’d use them to raise money for a particular project or show. Letson observed that this can be a great way to engage the community in helping you create something of value for them. Think of MoveOn.org, which asks you to help fund the script of a specific commercial, for example, rather than making a general appeal to “help us do the progressive work we do.” When the commercial is finally produced, you feel a sense of ownership — “I helped make that.”

Spot.us is a site that takes this idea and applies it specifically to journalism, allowing news orgs and reporters to raise money to help cover specific stories. American Public Media (APM) acquired Spot.us late last year, and it’ll be interesting to see how Spot.us and APM’s Public Insight Network (which supports crowdsourced journalism) can work in concert.

Previously, PRX and Louisville Public Media (LPM) partnered with Spot.us to create Story Exchange, a service that “gives listeners a chance to help create quality local journalism by directly supporting stories that matter to them.” Now other stations are considering getting on board. As John Barth of PRX explains, Story Exchange is intended to help station newsrooms do ambitious reporting while giving community members “skin in the game” with local news; as Barth sees it, crowdfunding is just another form of community engagement.

Since the Story Exchange launch in April 2011, LPM has successfully funded four out of six news stories in the ballpark of $200-$400 a pop. While this is not a huge volume of reporting (or a large pile of cash), the fact is that Story Exchange helped LPM provide coverage it otherwise couldn’t have produced. As LPM’s Todd Mundt explained, the funding supported, for example, "a series on Coal Ash that exposed a problem that had existed in a neighborhood near a big power plant for years, and gave a voice to citizens who didn’t have one." He said:

Story Exchange is a really interesting tool. I don’t know exactly where it will go, but there is something here that’s important and interesting. As far as we can tell, people — some of whom are members, and some of whom aren’t — see value in providing direct support for a story on a topic that matters to them. From our end, it’s a nice little bit of support, management supports it, we maintain total editorial control and our firewall is untouched. I see it developing as a way to produce some signature content with a measure of direct listener support.

Again, crowdfunding isn’t a silver bullet. Just like other fundraising techniques, sometimes it works, and sometimes it doesn’t — and marketing matters (a lot). But increasingly, crowdfunding is an approach that many independent media makers are finding effective, and more stations would do well to begin experimenting.

Do you have experience with crowdfunding? Share lessons learned.

In addition, the websites for Kickstarter, IndieGoGo and GoFundMe offer tips and tutorials.