5 Questions Publishers Should Ask Before Committing to a Social Platform 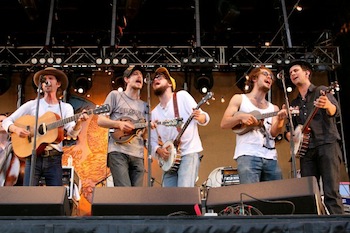 VH1 let two fans who "checked in" attend a concert by the musical group Mumford & Sons, pictured here in Austin. (From the group's Facebook page.)

We're moving from the classic business consideration of 'build or buy' to 'build or use.' That new openness is fomenting a wealth of editorial and business ideas."

J Crowley, Foursquare’s head of business development and media partnerships, greeted a study group then showed off pages that some of the best-known media companies had created on the location-based social sharing service.

The small international study group I was with — journalists, technologists, a publisher and a researcher learning about media and technology efforts in New York as part of a countrywide tour earlier this month — listened to Crowley with interest, asking questions, taking notes, and brainstorming about how to create new opportunities.

Later, after leaving the company’s headquarters near Manhattan’s Cooper Union, we expressed some qualms that publishers might want to heed when working with a social media partner (see list below).

There’s a double-edged sword when you give a social media platform access to your users.

By putting “Like,” “Tweet” and other share buttons and letting users check in and interact with social media, media properties get more traffic and they get the opportunity to reach people on whatever social platforms and tools they enjoy.

The platforms, on the other side, get the benefit of content that can engage and even delight people. They also get data, and over time can build profiles on users that outstrip anything the individual media property is likely to have.

If I look at the New York Times, they know about my behavior on their website and apps, and perhaps can place a “cookie” to track some other web usage.

But the social platforms can learn not only more of the media I like, but also the stores where I shop, performances I attend, restaurants I eat at, the gym where I work out, my school and more. That profile is not only more full and rich but also more valuable to marketers.

Crowley’s examples of Foursquare pages included some high-profile media players — and that means a lot of user data.

Bravo, for one, has lists replete with tips about where to eat and shop in New York and Beverly Hills that match locations featured on the network’s “Real Housewives” and “Millionaire Matchmaker” shows.

The History Channel’s page gives background on historical spots in London. Ellen DeGeneres has left dozens of tips on where to find vegan fare, cupcakes and theme parks across the United States.

Foursquare users can note that they’ve visited recommended places and leave their own tips and comments that run through the brands’ pages.

Crowley said the media properties get the advantage of increasing fans’ involvement, and rewarding the most faithful. “You can literally be at a location and watching videos from a show’s visit to that place on your phone,” he said.

It’s not only Foursquare, of course. Facebook has created a page devoted to helping media and encourages them to place widgets and “like” buttons. Tumblr is becoming a more important referral engine for younger women.

Bravo’s lists on Foursquare recommend places the network’s shows have been.

When I asked Mike Lazerow, CEO of social marketing firm Buddy Media, last year if publishers and other brands were justifiably concerned about Facebook having data on their users, he seemed unconcerned.

“Compared to the gift Facebook gives by giving you access and paying the freight” such as hosting and web development costs, he said, “letting them have your data is a non-issue.”

It is true that media properties can give their communities value for the cost of a few staff hours. We’re moving from the classic business consideration of “build or buy” to “build or use.” That new openness is fomenting a wealth of editorial and business ideas, from map mashups to new kinds of ads that incorporate constantly updating messages from social media.

But I don’t completely agree with Lazerow. It’s important to be mindful when building upon another’s platform, and it makes sense to weigh the risks.

1. Is the service truly useful, and are enough users on it?
Are enough people in your core community tech-savvy enough to use what you’re putting together? Do they have smartphones, tablets and computers and use them in the way you intend? Those considerations may temper the amount of effort you put into developing new uses on a hot platform or tool. Google+ is big among a swathe of the media and tech-savvy, for example, but it’s far from ubiquitous.

2. Is it worth the cost?
Even the simplest social media take some time to seed and curate. As I write this, CNN’s Foursquare page doesn’t show any interactions since last September.

3. Will the service stay free and supported?
Today, some of the most popular services share a wealth of data through their API (application programming interface). APIs are, basically, hooks into a database that allow others to build applications with that information.

Twitter’s API has spurred creation of a large numbers apps, even new businesses like TweetDeck and Hootsuite that let users log on and interact with the service without having to open a browser.

“We try to make the API as open as what we use [Internally],” Foursquare’s Crowley said. “Almost everything is available.”

Yet, just because a service is sharing data today doesn’t mean you’ll have it tomorrow. What if, as with Facebook Places or Facebook Deals for mobile, the service decides to pull the plug ? If they decide to charge, will your gains justify the cost?

You can always point out to users the reason for discontinuing or charging. You should be aware of the possibility going in.

4. What data are you getting back?
Does the service let you have data on your users? Facebook shows “insights” on pages that give you a sense of interactions over time, at least in aggregate. You have to work harder to figure out interactions at a more granular level.

5. Should you offer more than one?
By offering more than one social tool, you will gain information from each of them, and serve folks who may prefer one over the other.

You’ll learn more about the ways the services can work. And you’ll get some protection against becoming beholden to one service. If you use Foursquare as a location-based service, for example, perhaps you should use other competitors as well.

By using a social platform, you’re helping yourself and your community, but you’re also helping build the platform. It doesn’t hurt to hedge your bets.