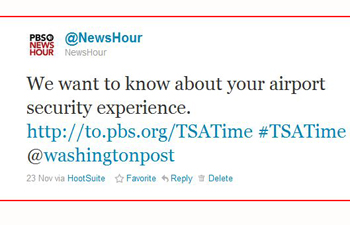 The PBS NewsHour created a way for the public to help report the facts of their airport security experience via Twitter to better report the TSA story.
Rather than it being a symptom of an overreacting media, it was a cure that quickly sussed out the truth." - Melissa Bell

During Thanksgiving week, the debate over stricter TSA security measures was turning into the big story. A handful of airport security anecdotes were making the rounds via news organizations and social media, but no one knew before the biggest travel day, the Wednesday before Thansgiving, whether National Opt Out Day protests would create air travel gridlock.

Not knowing how the story would play out, the PBS NewsHour team decided to craft a way for the public to help report the facts of their airport security experience so we could better report the story. Thus, the #TSATime hashtag was born on Twitter.

Here’s how we pulled off the project, and why collaboration and planning were key.

At a weekly planning meeting, we decided crowdsourcing was the best way to get a handle on the airline security story. We knew many travelers were going to be talking about their security experience on Twitter. We figured we could find a way to aggregate those reports into something useful.

Unlike other Twitter hashtag trends that crop up organically, we knew it could be tough to create one from the ground up. We settled on asking travelers to use the #TSATime hashtag and tell us the three-letter airport code where their travel began. Here’s a sample of how we asked:

How long did it take you to get through security? Tweet w/ #TSATime and 3 letter airport code http://to.pbs.org/TSATime

It was a straightforward question that would create data that we could easily track without getting overwhelmed. Knowing that this issue had created passionate debate, we took pains to keep all of our language neutral. We asked people to report facts and observations, not what they thought about the new security measures.

After the idea was cemented, our wonderful graphics and design team built an embeddable widget in less than 36 hours that could also be viewed on smartphones. (Interactives editor Chris Amico summed up that process in his own blog post.)

To keep the project manageable, we decided to focus on the 52 busiest U.S. airports, because security lines might be a bigger issue there. But we also included the option to see all #TSATime tweets in real-time to get a glimpse of how the story was playing out across the country.

Of course, this project wouldn’t work unless people actually used it. We used several mediums to promote the trend. Luckily at NewsHour we can use social media, our website and our broadcast. The key was using them all effectively to help it catch on.

On Monday night of the busy travel week we published the first blog post announcing what we were doing and how to participate.

On Tuesday, we added a promo video, complete with Hari Sreenivasan’s luggage, that also aired that night on the NewsHour:

Using the NewsHour’s Social Media Google Group email blast, we reached out to other public media stations with this information and provided pre-written tweets, Facebook posting language, five easy ways to use #TSATime and the widget.

Of course, we also reached out on social media. We knew it was a useful and timely idea that would easily spread once people caught on. I couldn’t find any organization that had a similar project or hashtag, so we happily offered it to anyone and everyone.

#TSATime really took off when other news organizations began to pick it up and tweeters began to help spread the word. I received a call from the Washington Post’s Melissa Bell, who runs their BlogPost blog. She asked if they could share the hashtag, and we jumped at the offer, CC’ing @WashingtonPost in some promotional tweets as the long weekend approached.

Bell said in an email that she thought partnering up was key for this particular trend since we were asking for a little more than a straight answer from followers.

“That was the key thing: it was kind of a tough trend to get a lot of responses to, but since we partnered up, we were able to both push it,” she said.

Others news organizations adopted the project as well, including the Houston Chronicle,
the Miami Herald and Fox News

I encouraged public media stations to promote the project using their local airport codes and ask for particular things they wanted to know. For example, KQED asked Bay Area travelers to include #KQED in their tweets.

Dave Gustafson, NewsHour’s online news and planning editor, put it well when he said “we helped the public participate in public broadcasting.”

By Tuesday evening, a few travelers were starting to use #TSATime and more people were pledging on Twitter to use the hashtag for their travel later in the week.

By late Wednesday morning, it became obvious that travel was going smoothly for most fliers across the country. #TSATime provided a way for the public to share that news directly, and allowed us to get a handle on the story more quickly than we would have been able to without crowdsourcing.

We curated tweets using Storify, and used our @NewsHourLIVE Twitter account to retweet a large number of responses.

Not forgetting our broadcast, a few tweets were included in a Wednesday night travel segment:

There were detractors of airport security coverage in general. David Carr of the New York Times mentioned the NewsHour’s widget in a piece decrying the massive coverage. However, the Post’s Melissa Bell shared this with me about the project.

“Our readers gave us the knowledge early on that we should not flog the story,” she said. “Rather than it being a symptom of an overreacting media, it was a cure that quickly sussed out the truth.”

We came away with two key lessons:

Cement Your Idea Early
The success of #TSATime hinged on it being a useful idea that could easily be conveyed to travelers and other news organizations. We decided early on to keep things simple, especially because we had just a few days from idea to implementation. Luckily, the design team was able to shift priorities to jump on this project, but we may not be so lucky next time.

Collaboration is Key
We knew from the outset that we’d have to “let go” of some aspects of #TSATime, as other tweeters and news organizations adopted it. We wanted lots of people to use it, but that meant the risk of profanity and abuse. Thankfully, people responded with enthusiasm for the project and plenty of useful responses.

Using this project as an example, I think we made a strong case for creating shared Twitter hashtags. This especially applies to public media, where the question of how to better collaborate across station boundaries always comes up. The key is to make sure that you make it as easy as possible for other public media to participate, and tell them why it helps them. I wrote tweets, suggested changes that could be made for individual communities and copied embed codes into emails to save everyone a step.

The #TSATime widget is still live, and a few tweets show up here and there. We’ll continue to use it and promote it as a resource, especially as holiday travel ramps back up again. We know that the framework we built could be used for other crowdsourcing projects, too.

What did you think of the #TSATime social media experiment? What could we have done better? I’d love to hear what else we can do with it, and other ways public media could use it to their advantage.

Teresa Gorman is the social media and online engagement desk assistant at “PBS NewsHour.” A Boston University graduate, Teresa spent time as a community journalist in upstate New York before reaching NewsHour. She first caught the public media bug as an intern at NPR as the executive producer of their Spring 2010 Intern Edition. You can find her on Twitter @gteresa.