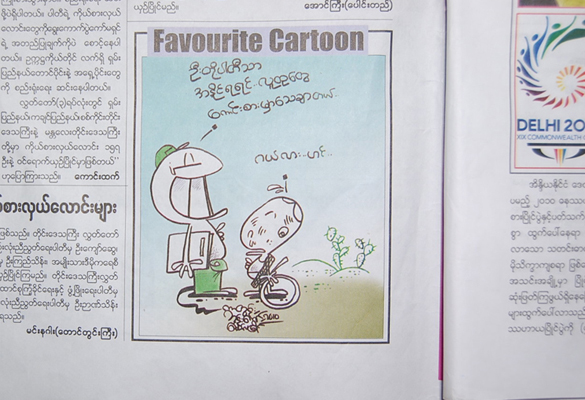 This cartoon in the magazine Favorite News caused the Burmese government to suspend publication for two weeks. In it the election candidate says, "Life will get better for people if our party wins." The child replies, "Really?"

Japanese journalist Toru Yamaji, the head of the Tokyo-based news agency APF, was arrested over the weekend in the eastern border town of Myawaddy, Burma, after reportedly entering from Thailand.

He was taken by helicopter to the Burmese capital, Naypyitaw, for questioning by military intelligence. Yamaji was attempting to report on the ongoing elections in Burma, despite the restrictions put in place by the military junta that rules the country they call Myanmar. Fortunately, Yamaji was released yesterday.

15 journalists [are in jail], and the New York-based Committee to Protect Journalists last year branded Burma the worst country in which to be a blogger."

Along with arresting and restricting the access of journalists, Burma also used the election as an occasion to downgrade Internet speeds and stifle the online press. Here’s a look at the crackdown that accompanied the recent, highly questionable, vote.

On October 18, Burma’s election commission decided not to grant press visas to foreign journalists, reinforcing the impression that the military government intended to isolate the country during the election. The commission’s chairman, Thein Soe, said that Burma did not need any foreign journalists or observers because it already had a lot of experience in holding elections. This, despite the fact that the country last had elections 20 years ago.

Several European journalists had their requests for tourist visas rejected by the Burmese authorities.

ADVERTISEMENT
Photo of Bagan, an ancient city in Burma

“The Burmese diplomats have clearly learned to use Google and are rejecting applications by people who are identifiable as journalists,” a French reporter whose visa was denied told Reporters Without Borders. Twenty-five Burmese journalists who work for foreign media and two Chinese correspondents were the only foreign media reporters allowed to cover the elections.

A report by Simon Roughneen at Irrawaddy, an independent newsmagazine and website that reports on Burma, quoted an official with China Radio International saying that “usually we cannot report on Myanmar,” or on other “sensitive stories,” unless specifically asked to do so.

The election commission also announced on October 18 that media would not be allowed into voting stations. The commission and the country’s Press Scrutiny Board, which is run by a military officer, closely examines all articles about the election and the statements of the 37 registered political parties. As an example, Favorite News, a privately owned magazine, was recently suspended for two weeks for publishing a cartoon that referred to the elections (see picture at right).

The Burmese correspondents of foreign news media were also closely monitored by plain-clothes police and soldiers during the voting on November 7, and throughout the preceding election campaign. “According to testimonies from reporters on the ground, some of them have been followed and sometimes searched, while the police spend their time taking photos of them while covering a story,” according to a recent report published by our organization, Reporters Without Borders.

Foreign journalists have for decades been finding it extremely difficult to obtain press visas for Burma and have been forced to travel under tourist visas. This heightens the danger for the Burmese who work as fixers or agree to interviews. Zarganar, the Burmese actor, comedian and political prisoner, was jailed after talking to the BBC in 2008.

Zarganar, who is nicknamed the “Burmese Chaplin,” was arrested on June 4 after talking to the BBC World Service and other foreign news media about delays in the humanitarian relief organized by the military after Cyclone Nargis struck the country in May 2008. He also blogged about the activities of the country’s Buddhist monks during the September 2007 protests.

Zarganar was sentenced to 35 years in jail during a closed door trial at Insein prison. An extra 14 years were added to his sentence less than a week later. His sentence was then reduced back to 35 years. He is not due to be freed until 2033. (There is a blog? dedicated to his plight if you want to learn more about his situation.)

Burma is home to some of the world’s most draconian media laws, and it ranked 174 out of 178 countries in the 2010 Press Freedom Index. We have also labeled Burma as an “Enemy of the Internet,” a distinction it continues to deserve thanks to its actions during the elections. Out of the 2,150-plus political prisoners in Burma, around 15 are journalists, and the New York-based Committee to Protect Journalists last year branded Burma the worst country in which to be a blogger.

It’s therefore not surprising that Internet connections inside the country were noticeably reduced in preparation for voting. “I can no longer connect to my Gmail account using proxies,” a Rangoon-based journalist said. “Accessing all the websites based abroad has become terribly slow.”

According to Irrawaddy, Internet cafes in Rangoon were closed in advance of the elections. From a November 1 report on the website:

Burma’s Ministry of Post and Telecommunications (MPT) has sealed off Internet access for Internet cafes and businesses, according to experts on Burma’s Internet infrastructure.

Sources close to the ministry who asked to maintain anonymity have told The Irrawaddy that Internet access is normal at all government and military institutions serviced by MPT, but “access for businesses and Internet cafes” is shut down to control the flow of information in and out of the country.

On October 5, Reporters Without Borders reported the disruption of two news websites due to Internet-based attacks. The Democratic Voice of Burma and Irrawaddy magazine were temporarily knocked offline. Both provide independent coverage of current affairs in Burma. The attacks are believed to have originated from the Burmese government.

On Sunday, the authorities ordered the privately owned Eleven Media group not to update the special “Elections” sections of its website or Facebook pages.

As of today, 13 reporters and two Netizens are behind bars in Burma. The fear is that more could join them in the aftermath of these elections.