Will France Sacrifice Online Freedom for the Sake of Security? 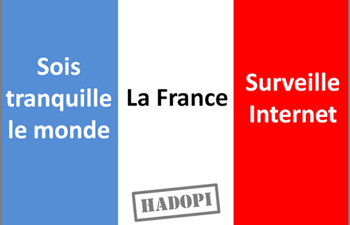 On September 8, the French Senate voted for a bill, called Loppsi 2, that seeks to create a dangerous online filtering system that could jeopardize the work of journalists and bloggers, as well as online freedom of speech for French citizens.

If this bill becomes law, any French website could be shut down with nothing more than a notification from an administrative authority. When the bill was passed in a lower house last February, it required intervention from a judge to make that happen.

Loppsi 2 is not a bill focused on freedom of speech and freedom of the press; but as it is currently drafted it ends up posing a threat to these principles."

The situation in France reflects the trend that’s seeing democratic states such as England and Spain step up online surveillance and control. This could pose a serious threat to freedom of expression and information. Under the current French bill, a government department called the Central Office for Combating Crime Related to Information and Communication Technology would be able to order Internet service providers and website hosts to filter websites without requiring a court order.

Filtering mechanisms will not be able to prevent their circumvention by offenders, will not eliminate offending content from the Internet and will have no impact on the source of the problem. And furthermore, they tend to filter out innocent content as well, such as the websites of child protection groups or sites that defend minors who have been the victims of sexual abuse.

Jeremie Zimmerman, co-founder and spokesperson of the advocacy group La Quadrature du Net, has long been warning against the dangers of this law. He cautions about how “collateral censorship” can affect the work of reporters and bloggers.

“Technically, blocking legal websites is inevitable,” he said. “Unfortunately, there is no legal means to gain access to the list of the blocked websites.”

Brice Manenti covers the issue for the magazine Nouvel Observateur. “With Loppsi 2, I am worried for freedom of speech as a citizen, more than as a journalist,” he said. “Allowing filtering is a way to get to a generalized filtering of the web, as it is in China for example. Freedom of expression would be under particular threat.”

In July 2009, an earlier version of the law stated that the police who suspect criminal activity would be able to use remotely introduced spyware under an investigating judge’s supervision in order to obtain information from computers without the knowledge of those targeted. If any kind of criminal activity is discovered — even if it’s outside of the initial suspicions — the information obtained can still be used to bring a prosecution.

The French Commission on computing and freedoms reserved judgment regarding this aspect of the law in 2009. (Journalists would be protected from of this kind of spyware by a law that protects the the secrecy of journalists’ sources, but bloggers and amateur journalists would not be protected.) The law would also extend the length of phone taps on people suspected of a crime.

In and of itself, Loppsi 2 is not a bill focused on freedom of speech and freedom of the press; but as it is currently drafted it ends up posing a threat to these principles. In a September article, the French daily newspaper Le Monde accused presidential aides of using a domestic intelligence agency to identify an official who was leaking information about a judicial investigation about a case involving labor minister Eric Woerth and L’Oréal heiress Liliane Bettencourt. Reporters without Borders subsequently joined with Le Monde in a lawsuit related to these actions. From our release about this action:

Reporters Without Borders campaigned for years for a law explicitly protecting the confidentiality of journalists’ sources and appeared before both the National Assembly and the Senate when they examined the proposed law that was eventually adopted.

The organization is outraged that covert police activity has trampled on the protection of sources enshrined in article 2 of this law. The authorities have a right to investigate leaks of confidential information but such investigations must be conducted according to the law. Any failure to respect the law protecting journalists’ sources must be punished or else it will be rendered meaningless.

In light of this example, there is reason to be concerned about the government’s increased use of spyware. It seems like it would only be a matter of time before it finds its way onto bloggers’ computers and machines inside newsrooms.