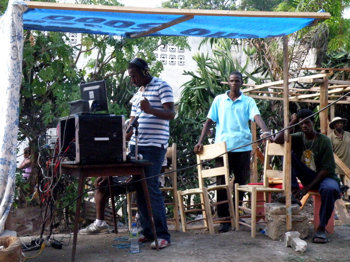 In Haiti, the radio has become a critical lifeline for earthquake survivors

Clothilde Le Coz just returned from Haiti, where she was part of a Reporters Without Borders mission. This is a special report about how Haitian media are responding to the disaster. The photos were taken by the author.

In two weeks, Haiti will be forgotten by much of the world.

After foreign media leave, which will happen soon, only Haitian reporters will remain in the country as witnesses and a source of information. As it stands today, they are struggling just to keep their fellow citizens informed, which is often the case in the aftermath of a natural disaster.

Roughly 250 million people a year are the victims of humanitarian emergencies, including epidemics, major accidents and natural disasters. When disaster strikes, the quality and free flow of information becomes incredibly important. Unfortunately, information is often unreliable in disaster zones, which complicates rescue and relief efforts. A lack of information and communication above all affects the victims who are left unprotected and disoriented. A strong media presence helps people maintain a vital link with the outside world, assists with the mobilization of aid, and fosters a desire to help the victims.

So what will happen in Haiti when the foreign media go home? All of the above could suffer. That means Haitian media are incredibly important to the present and future of the country. They are doing their best to continue to work in the face of many difficulties, as a recent report from Montreal newspaper The Gazette explained:

Like most of the countless journalists here, [Haitian photojournalist Georges] Oreste has been unable to send his work anywhere, since there has been no or intermittent electricity or Internet. Still, they have soldiered on, without pay or the proper tools to document this extraordinary event in which they, too, are part of the story.

Traumatized after the sudden and violent loss of numerous friends, relatives and their country, exhausted and with little food or water, they’ve hung their press passes stoically around their necks, grabbed notebooks, microphones and cameras and collected story after heartbreaking story of their fellow survivors.

In addition to to print journalists and photographers, local radio broadcasters have become particularly important. They continue to pump out news, information and hope to the population.

Reporters Without Borders in Haiti

What remains of a local radio station

Today, Port-au-Prince looks like it was visited by Godzilla. Champ de Mars park and other squares and parks in the capital have been turned into refugee camps. The city is 60 percent destroyed, and buildings are devastated — as if they were crushed by the monster’s foot. Reporters Without Borders traveled there to set up a center for local media in order to help local journalists deal with the disaster and do their jobs.

Over the course of six days, our team created a place were reporters could have access to the Internet, phones, computers, videocameras and other essential equipment and services. The center’s mandate is to act as a news hub for government authorities and NGOs so that they can address as many media as possible in one place. We also advised and assisted the government and its partners to help with the relaunch of local news media impacted by the earthquake. This was done in the capital and in towns such as Petit-Goâve, Grand-Goâve and Léogâne.

Solidarity Built Through the Radio

A scene in Port-au-Prince

In the capital, only roughly 10 of the original 50 radio stations are broadcasting. Most of them are working outside because their buildings are either too dangerous or were completely destroyed. The journalists are traumatized and are still dealing with the shock of what happened. But they go on, working in the daylight and sleeping outside during the night, just like everyone else.

We were told the buildings that housed the 12 radio stations in the southwestern town of Petit-Goâve were safe, but that their equipment was badly damaged. As a result, only some of them are broadcasting. In Léogâne, a town nearer to the capital, five of the nine stations are able to broadcast, although 85 percent of the buildings in that area were destroyed or badly damaged.

When we met with local reporters, they told us that, “in Port-au-Prince, everyone has a story to tell.” This is why radio is playing such a key role in establishing contact between survivors and rescue teams. The stations broadcast useful information in the local language, and air regular programs that provide updates on the situation. They also allow the population to express its needs and expectations, and help forge solidarity among the victims. People listen to the radio to find out when and where banks will be open, and to listen to ministers explain the decisions the government is making to resolve the situation.

By helping local radio to get back on the air, and by giving local reporters the chance to do their jobs properly, we increase the chance that critical information will continue to flow out of Haiti after foreign media are gone.