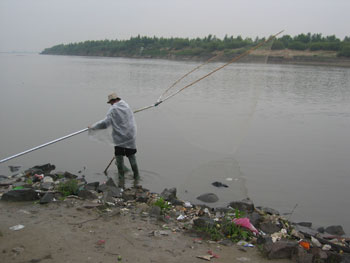 Since May 2009, Tamer Mabrouk has held one of the saddest records regarding human rights abuses in Egypt. He is the first blogger to receive a fine after a company sued him for having criticized its activities in Lake Manzala, which is connected to the Suez Canal. Mabrouk was fined $8,700, lost his job, and was forced to move out of Port Said where he had been leaving for years.

Mabrouk’s offense was that he blogged about the pollution the Trust Chemicals Company was dumping into Manzala Lake. Perhaps because they were afraid — or corrupt — the local authorities did not investigate the issue after Mabrouk brought it to light. So, with a few clicks, he decided to publish pictures proving the detrimental effect of the Trust Chemicals Company. In June 2008, the company sued him for defamation.

“I tried to sue the company myself to ask for its closure,” Mabrouk said in a video posted on YouTube. “But the local court argued it did not have the jurisdiction to decide on that matter. Meanwhile, the Trust Chemicals Company was offering me money in return for my silence. I turned it down. Now, they want me to publish a denial.”

(You can read more about Mabrouk’s case at the Reporters Without Borders site.)

Mabrouk is by no means the only person to suffer for reporting about environmental disasters. Reporters in different parts of the world deal with fines, jail and threats as a result of their work.

In China, for example, environmental activists often face repression after they gain the attention of international media. In July 2009, the anti-nuclear activist Sun Xiaodi and his daughter were sentenced to two years in a labor camp for “divulging state secrets abroad” and “publishing rumors.” Their crime? Publishing information online about the contamination of inhabitants of Gansu Province, which was caused by a Uranium 792 mine. Sun Xiaodi also published articles on corrupt officials of the Diebu district. For more than 20 years, Sun Xiaodi, a former worker in the Uranium 792 mine, has been fighting to raise awareness about the contamination.

Another environmental activist, Wu Lihong, received a three-year prison sentence for warning Chinese and international media about pollution in Lake Taihu, which is the third largest lake in China.

Aside from punishing those who speak out, the government also attempts to restrict the flow of critical health information. In 2005, the Chinese Propaganda Department, the government body that is also in charge of censorship, waited 10 days before authorizing the press to report about the benzene pollution threatening the Songhua river in Northeast China, completely disregarding the millions of people who live there.

The environment is one of the biggest issues of our time. In order to preserve nature, we must be able to evaluate the resources we have left, and examine how they are being used. This kind of data helps inform society and influence political leaders to create new standards. It’s essential that specialists and environmental reporters are able to provide accurate information about the world around us. Unfortunately, journalists and bloggers are facing more and more obstacles and threats as they go about their work.

Sometimes, a single visit by a journalist at a sensitive location is enough to spark a crisis. As an example, Cambodia has lost half of its forests over the last 15 years. After the organization Global Witness released reports on the situation, three journalists investigated the issue and subsequently received death threats. Their reporting revealed unflattering details about the involvement of relatives of the head of the government, Hun Sen. His brother, Hun Neng, said if anyone from Global Witness came to Cambodia, he would “beat his head up until it breaks.”

Lem Piseth, a journalist from Radio Free Asia, also received death threats as a result of his work. “About the story of the forest; I want you to know that you won’t find enough land there to bury you,” he was told. Piseth was forced to flee the country.

In undemocratic countries, bloggers and reporters are often left to fend for themselves, which is why it’s so important that their work is recognized and publicized.