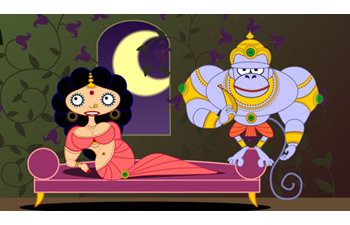 Once hugely popular, Hanshaw had almost completely disappeared from public knowledge when Paley decided to include her songs in the score for her film. “How could this happen to an artist?” asked Paley, “The answer is copyright. Annette Hanshaw became completely obscure because the copyrights to her songs were locked away.”

We expect the Creator-Endorsed Mark to increase audience awareness of who is and isn't sharing revenue with artists." -- Karl Fogel, Questioncopyright

To Paley, modern copyright law is a force that works to control and contain art to the benefit of publishers and the detriment of artists. Before the rise of the Internet, a filmmaker couldn’t hope to have his or her work widely exhibited without selling their copyright to get a distribution deal. But today, the web makes it possible for artists to reach out to the audience directly. And Paley’s film is the first experiment in a unique new distribution model that combines traditional DVD sales, viral dissemination, and the “Creator-Endorsed Mark” logo that lets buyers see that the artist is being paid by a distributor.

Paley spent six years and $200,000 to create Sita Sings the Blues, a comic retelling of the ancient Sanskrit epic Ramayana. A combination of different animation styles, including Flash, Squigglevision and rotoscoping, the film follows the relationship between epic hero Rama and his wife Sita — and their eventual break-up. Paley began the project as a way to deal with her separation from her then-husband, and vignettes detailing the end of Paley’s own marriage are interspersed throughout the narrative. Key sequences are told in song — with Sita singing in Hanshaw’s sultry voice.

Paley didn’t want her film to suffer the same eventual fate as Hanshaw’s music, so instead of seeking a traditional distribution deal Paley took the unusual step of releasing the film for free on the Internet and encouraging others to pass it along.

On her blog, Paley explained her unique distribution plan:

While making one DVD pressing of 4,999 copies, I will place promotional files of the entire film — at all resolutions, including broadcast-quality, HD, and film-quality image sequences — online at archive.org and as many mirror hosts as volunteer to share it. I will license it either as Creative Commons Share-Alike, or some equivalent of the GNU/Linux license. This will prevent it and any derivative works from ever being copyrighted by anyone. Of course this license won’t apply to the songs, which will remain under copyright by their respective corporate overlords. But clearing the licenses first will decriminalize it, and make it safer to screen in theaters (and theaters will be free to screen it and charge for it without obligation to me). The free online copies are promotional copies.

Paley said that she originally believed that she only needed to secure mechanical rights, which give one the right to release an audio collection and are regulated by the government, to use Hanshaw’s recordings in her film. Only later did she realize that syncing the recoding to film required her to also secure synchronization rights — which are not regulated and for which owners can charge any fee. Eventually, she negotiated a $50,000 fee paid to the music publisher of Hanshaw’s recordings to allow the film to be shown theatrically and authorize an initial print run of 5,000 DVDs.

Other artists have released their work for free online, often with the caveat that their products are freely distributable as long as others don’t try to profit from them. But Paley has gone one step farther, in allowing and even encouraging others to sell “Sita Sings the Blues” — often without paying a penny back to Paley. (Although they will need to make payments to the songs’ copyright holders.)

Even though she may not see any returns for the majority of views, Paley thinks that allowing others to sell the film will further spread awareness. Ultimately, she’s counting on the hope that viewers who enjoy the film won’t be satisfied knowing that the artist hasn’t received due compensation for her efforts.

And that’s where the Creator-Endorsed Mark comes in.

Paley developed the mark in cooperation with copyright reform advocacy non-profit Questioncopyright.org. The group is helping her sell DVDs, merchandise and taking donations to pay off the $50,000 cost of the music publishing payout.

“We expect [the mark] to increase audience awareness of who is and isn’t sharing
revenue with artists,” said Karl Fogel, president and secretary of Questioncopyright. “Traditional publishing discourages awareness of
these issues, because people’s natural presumption is that if a publisher is distributing a work at all, then that publisher must naturally be sharing revenue with the artist (or they wouldn’t have had permission to publish it).”

Fogel said that many people will purchase a physical manifestation of a work if they know some of the money will reach the artist. In short, the mark lets a buyer know that the work is being shared in a way that the original creator approves — usually, that means that some of the proceeds go back to the artist.

Different versions of the mark exist to reflect different endorsement arrangements. A generic mark only indicates that the artist has lent their support to a distributor, while a “percentage” version shows that a distributor has agreed to give the artist a certain percentage of the proceeds.

“Art is a magical thing,” said Paley, “When people connect with it, they want to connect with the artist. If you hear a musician, you want to buy the CD. The Creator-Endorsed Mark is a totally new thing that lets you know that you’re supporting the artist.”

“While [the mark’s] use is not limited to freely distributable works, that’s probably
where it makes the most sense,” said Fogel. “After all, when the author or publisher
doesn’t allow unendorsed versions, then audiences only have one choice of where to get the work anyway, so there’s little decision-making for them to do. The mark is designed for situations where the audience has choices, and is looking for guidance among those choices.”

“Sita Sings the Blues” is the first artwork to use the mark, so it remains to be seen how successful the experiment will be. But Fogel noted that the film has “been able to sell DVDs at a steady clip even though the entire film is available for free online and anyone else is free to make and sell DVDs too.”

The big question, of course, is why would anyone choose to buy a copy of a film that they could download off the Internet for free? Beyond a sense of duty to an artist, is there any reason to pay money? For years, artists and publishers alike have argued that free distribution kills the demand for paid product, that people will never willingly pay money if they can avoid it.

Paley rejects that notion. Though she is distributing the film for free, she noted that she’s selling something else that still adds value.

“What we’re selling is the packaging,” she said, “Yes, you can download it for free but you’re spending your time, bandwidth, and hassle. You have to label it with a plain old sharpie and store it in a crappy package. If I were to do this, my time to download, burn and store is worth more than the $20 to just buy a nice, stable, silk-screened DVD.”
“The more people share content, the more valuable it becomes,” she continued, “It creates more demand for physical containers.”

The idea isn’t entirely new. So far, Paley said that “Sita Sings the Blues” was the first use of the Creator-Endorsed Mark, but that several documentaries on copyright reform had used similar models to encourage distribution. In addition, some authors have had success by posting books online for free. Boing Boing co-editor Cory Doctorow, for example, releases some of his science fiction literature online under a Creative Commons license and attributes the increased sales of his physical books to the familiarity that the online versions garner.

“As a consumer, would you rather use 200 pages of printer paper and buy a new cartridge to download a book or spend $14 and get a nicely bound book?” Paley said.

So does that mean the same model could work for any kind of art? Paley freely admits that “Sita Sings the Blues” might be especially well suited to audience distribution. It’s a bright, lively cartoon full of catchy music and dry humor.

“Some things are more visual than others,” she said, “The audience’s attention is valuable. Some things are much easier to pay attention to. ‘Sita Sings the Blues’ is sort of catchy. It has viral qualities. That helps. A film with long pensive scenes might be a brilliant masterpiece but it might not spread as well. But the good thing is that this model won’t work for stuff that people don’t like.”