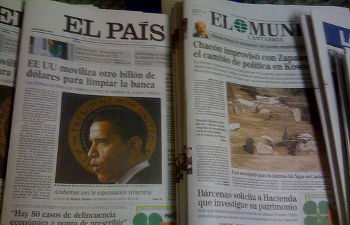 A new printernet distribution model could revolutionize newspapers in Spain. Image by "Erikamussen":http://www.flickr.com/photos/erikrasmussen/ via Flickr.

In my March 24 column, I talked about the “printernet,” a system of networked desktop publishing where the desktops and printers are spread throughout the whole world. This is another way of describing the new printing model of “distribute and print,” where you send a digital file via the Internet to the printing facility closest to the final distribution point rather than printing at a central location before distributing.

This week I came across the description of a “distribute and print” newspaper enterprise in Spain and Portugal. I think it’s fair to call it a newspaper printernet.

An agreement between Ontime Transport Logistics and PressTerra will provide expatriates and tourists in Spain with their familiar newspapers as of May 4, 2009. The process is very simple: Publishers make their content available to PressTerra, who in turn ensures that the right type of file is transmitted to the print site and on time. After printing has completed, the newspapers are picked up by or delivered to the Publisher’s preferred Distributor. If no Distributor is available yet for that market, PressTerra will bring the Publisher into contact with an established Distributor and upon request will negotiate on the Publisher’s behalf.

Currently, the model appeals to foreign newspapers looking to reach travelers and immigrants in the Iberian region who want to stay in contact with the “home country.” Various hometown newspapers supply the content in the form of PDF files. PressTerra handles the management, while Ontime Delivery and Logistics handles the delivery and Imcodavila manages the print-on-paper. Oce supplies the digital manufacturing pieces. Other offset printers will be added on as the demand grows.

The new user experience is the result of the mash-up of prime time digital print technology, the network built by Oce with their Digital News Network and an entrepreneur to pull it all together. (My March 24 post describes the Oce print platform that enables mass customization of the newspaper product.)

Hobbes History of the Internet says that the structure of the Internet started in 1961, but arguably the tipping point when the Internet began on its path to ubiquity occurred on April 22, 1993, when Marc Andreessen and Eric Bina released the Mosaic browser. The timeline of the printernet is still to be written, but likewise certain events need to take place to cause a similar tipping point. Two milestones were the release of Xerox’s Docutech in 1992 and the establishment of Oce’s Digital Newspaper Network in 2001. And now the launch of the PressTerra print services network in Spain and Portugal constitutes a third.

In this case, the entrepreneur is PressTerra founder Ralph Vooys, who worked as a logistic and distribution expert for a major airline before founding PressTerra in 2006. From the point of view of this history, he saw a new opportunity.

Fast forward to May 2009. According to the press release, PressTerra signed agreements to print and distribute news-on-paper editions of the following newspapers in Spain and Portugal:

*  El Mercurio from Chile
* El Colombiano from Columbia
* Diario Hoy from Ecuador
* La Jornada from Mexico
* El Comercio and El Correo from Peru
* Tages Anzeiger from Switzerland
* NRC.next from The Netherlands
* The New York Post from the U.S.
* Romania Libera from Romania
* 24 Chasa and Trud from Bulgaria
* Dagens Nyheter and Goteborgs Posten from Sweden

What this could mean for U.S. papers

If the printernet grows in Spain, it’s likely that the same kind of network will quickly move to other parts of the globe. The present printernet model in Spain is geared toward immigrants and expatriates, so the implications for a multi-ethnic nation of immigrants are clear. But there is more to consider.

Versioned newspapers can deliver relevant material to interested audiences that are widely dispersed geographically. Or they could be delivered to geographically concentrated populations with widely diverse interests. A robust printernet infrastructure would enable them to distribute the files and print locally.

In addition to a much lower carbon footprint, it means there would be space in the paper product to sell either local ads or regionally segmented national ad campaigns. The most obvious geographically concentrated regions with culturally diverse backgrounds are the communities that are the standard operating space of the traditional newspaper.

Versioned printernet newspapers have more applications beyond serving immigrant communities. An under-appreciated opportunity is the diverse population that is concentrated in high schools. The short story is that content is assembled on the web. The teacher in the classroom chooses just the appropriate material for next week’s class. And a Weekly Reader on steroids is delivered to the school and the classroom. It is supported by ads by public health, government and public universities.

Michael Josefowicz spent 30 years at Red Ink Productions, a boutique print production brokerage he co-founded which served New York-based design studios and non-profit organizations. He came out of retirement to teach production at Parsons The New School for Design for the next 7 years. He now blogs about print at Print in the Communication Ecology and about the digital printing industry at Tough Love for Xerox.