Mediatwits #144: Can Digital Dimes Add Up for Newspapers With Less Print? 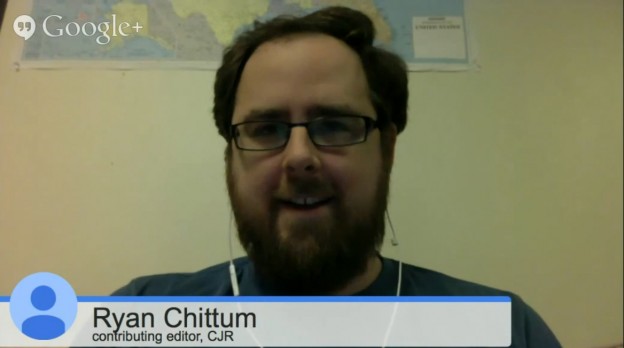 Ryan Chittum, a contributing editor at the Columbia Journalism Review, explains why he thinks most papers won't be able to make back the advertising revenue they're losing in print.

It’s easy to understand why newspapers are concerned about advertising dollars moving toward the web when you consider that advertising accounts for nearly 70 percent of revenue in the news industry. And more of that money is expected to migrate to digital in the coming year. But Advance Media – parent company of the New Orleans Times-Picayune and other papers around the country – thinks it has the answer: Over the last five years they’ve reduced the number of times they publish in print and they’ve made a greater push into digital. Could Advance Media’s strategy of reduced frequency printing be the answer? Former newspaper publisher Martin Langeveld thinks so. He argues now is the time to transition while they still have their print readers, but many newspaper companies have been slow to reduce print frequency. On our show, we’ll discuss the changing business models for newspapers, with special guests Martin Langeveld; Ryan Chittum, a contributing editor at Columbia Journalism Review; and Jesse Holcomb, senior researcher at Pew. They’ll be joined by Mediatwits regular Andrew Lih at American University. PBS MediaShift’s Mark Glaser will host and Jefferson Yen will be producing.

"Print is not dead. It's just that seven-day print is not viable." - Martin Langeveld on the future of newspapers

Ryan Chittum is a former Wall Street Journal and Columbia Journalism Review reporter and writer currently working on a project for the International Consortium of Investigative Journalists. He co-edits the annual Best Business Writing books published by Columbia University Press and lives in Seattle with his wife and three daughters. Follow him @RyanChittum

Jesse Holcomb is a senior researcher at the Pew Research Center. He is an expert on the information revolution, including its impact on journalism and the public. Before joining the Pew Research Center, Holcomb was a staff writer at the Public Interest Network and editorial assistant at Sojourners magazine. He received his master’s degree from George Washington University’s School of Media and Public Affairs and later served as adjunct faculty there. Holcomb is an author of studies on the changing news ecosystem, non-profit news, the use of social media in journalism, and media coverage of religion. Holcomb speaks to U.S. and international audiences about the center’s journalism research. He tweets @JesseHolcomb

Martin Langeveld spent 30 years in the newspaper business, 28 in the Berkshires of Massachusetts and two at the Brattleboro (Vermont) Reformer, from which he retired in 2008. Since then, he has blogged about the media business, and particularly on new business models for local news, at Nieman Journalism Lab and his own blog, News After Newspapers. His day job is marketing and economic development consulting for local organizations in Brattleboro, Vermont. You can follow him @MartinLangeveld

In a recent bi-annual letter, Advance Local President Randy Siegel reported that this year the company anticipated they could grow their digital ad revenue faster than what they were losing on printed ads. That goes against the conventional wisdom of the past years when legacy news outlets complained that they couldn’t replace print dollars with digital dimes.

According to a forecast by Strategy Analytics, out of the $187 billion that will be spent on advertising, 28 percent or $52.8 billion will be headed towards digital, making it the second highest category after television. Digital advertising will also see the largest jump growing by a rate of 13 percent, if their numbers prove to be correct. Meanwhile, print is expected to see a nearly 8 percent decline in ad dollars. But a lot of those digital dollars are largely going to tech companies such as Google and Facebook. The Newspaper Association of America released numbers showing that while print revenue has had a steady decline, the increase in digital ad revenue for newspaper companies has been relatively small.

Now that digital is getting a larger slice of the pie, how can newspapers make more online? Will less print editions help cut costs alongside more pay walls? How might papers recover the lost revenue from print advertising? Are there other income streams papers can turn to other than ads and pay walls?