How NPR, Public Media Use #PubJobs to Recruit Talent Collaboratively 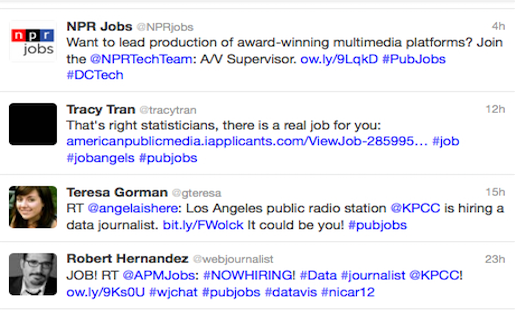 A stream of tweets using the #PubJobs hashtag to advertise jobs in public media.

Many organizations approach hiring like they do most other functions: as an individual sport. But when it comes to recruiting top talent in today’s rapidly evolving media landscape, collaboration is necessary.

As the director of talent acquisition for NPR, I believe that talent management is the engine driving public media forward — and that this engine is best fueled by collaboration.

I believe that talent management is the engine driving public media forward -- and that this engine is best fueled by collaboration."

A number of public media organizations have created Twitter accounts dedicated to recruiting — I run @NPRJobs, for example; other examples include @PBSJobs and @APMJobs. The existence of these accounts helps signal our openness and interest in connecting with top talent. But it’s really a hashtag that’s fueled collaboration between us all.

#PubJobs is a hashtag and recruiting strategy I implemented last June with NPR, American Public Media, and about a dozen or so public media stations across the country. The idea is simple: Anyone can tag a tweet with #PubJobs to promote open jobs and career opportunities in public media, and of course, those interested in working for public media can follow #PubJobs to stay apprised of openings.

Since its launch, use of the #PubJobs hashtag has steadily grown, with more than 720 tweets by over 130 unique contributors (and counting). Fully 60 percent of the #PubJobs traffic is re-tweets, illustrating the virality — and visibility — that participation provides. The result? Broader promotion, and awareness, for all public media jobs, and a way for job seekers to easily view opportunities across the public media system.

Other industries have their own hashtags — #socialmediajobs, for example; does yours? If so, do you find it useful?

In addition to these social media activities, I collaborate offline with human resources colleagues across public media. For example, after just a few months on the job, and soon after launching @NPRjobs, I received a “welcome to public media” call from my counterpart at American Public Media, Jen Hanlon Ash. We spent about an hour together on that initial call getting to know each other and sharing ideas. We decided we could both benefit from regular dialogue, so we scheduled a recurring monthly chat where we bounce ideas off each other, discuss projects and hiring challenges, and brainstorm new recruiting initiatives. She’s become a friend and someone I can count on for advice; and she can count on me for the same.

Another example: Last year, KUT (the NPR station in Austin, Texas) wanted to hire a bilingual reporter for the StateImpact initiative. The head of their web department called me up to brainstorm recruiting strategies, and we came up with the idea of sending out bilingual tweets with the #PubJobs tag. The campaign went viral and led to a fresh pool of bilingual applicants.

Here at NPR, we’re committed to promoting, and growing, #PubJobs. That means helping to promote all job opportunities throughout the public media system, not just via social media but also through word of mouth, conference and event-related promotions, and through our job application FAQs (something every NPR job applicant receives). We also point all of our applicants, successful or not, to opportunities in public media beyond NPR. (We believe strongly that we all benefit from having great talent in the system.)

We’re constantly looking for new ways to grow and evolve the #PubJobs conversation and enhance recruiting collaboration within public media, and I’d love your feedback. How can we expand #PubJobs? And what are other ways that collaboration can help media and technology companies attract top talent?

Lars Schmidt is the director of Talent Acquisition with NPR where he is the voice behind @NPRjobs. His HR and recruiting experience span a variety of industries including media, technology and entertainment. An admitted “tech geek,” he’s passionate about social media, technology, and all things digital. You can follow him on Twitter at @ThisIsLars or learn more about him here.